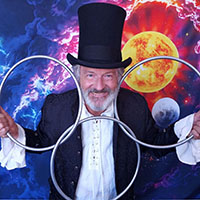 As a comedy magician, this entertainer has performed all over the world. This includes television shows in 5 countries, three summer seasons in Italy, six months touring Australia, numerous trips to the Persian Gulf and fifteen different cruise ships. He has also worked as an actor, master of ceremonies, presenter and voice over talent, for radio, television, commercials, industrials, and live performances.