Back to Tribute Bands 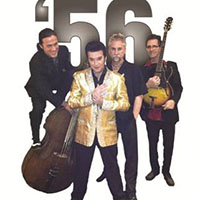 This singer has been impersonating Elvis Presley since 1993. His father introduced him to the King of Rock and Roll at the tender age of 2. From that point on he grew to love and admire The King's music. He has won many Elvis contests throughout the United States. He has also been a pre-qualified finalist for the "Images of the King" contest in Memphis, TN several times.